Travel & Play: The Best International Airports with a Casino

We’ve all been stuck at an airport with a few hours left until our plane arrives. Time seems to crawl to a stop when you’re sitting in uncomfortable airport chairs. There used to be nothing else to do but stare at random strangers, wondering where they’re going to or coming from.

However, things are a bit different nowadays. Airports have recognized the need to provide entertainment to travelers with a few hours to kill. And what better way to pass the time than to play your favorite casino games?

Several states in the U.S. have passed bills that allow gambling on airports. Although, some people dreaded the thought of the ceaseless sounds coming from hundreds of slot and poker machines. However, the reality isn’t nearly as bad as they’ve made it out to be.

In fact, the few airports that do provide this form of entertainment have separate casino areas. So the games in no way interfere with the commute. If anything, we’re inclined to think that the slots make the trips more enjoyable.

We’d choose casino games over boredom any day of the week. On top of that, if you’re lucky, the winnings might cover the cost of the trip.

Gambling is only legal in a few places in the United States, so we reckon this further improves the appeal of airport casinos. That said, there are a few things to keep in mind when playing casino games at an airport.

First, the slot machines at airports are “tighter.” What does this mean, exactly? Well, all slots and poker machines are calibrated to have a certain payout percentage. In online casinos, for instance, this percentage can go up to 98%. Meaning, for every $100 you put into the slot, it will give $98 back in the long run (thousands, if not tens of thousands of spins).

However, the story is a bit different when it comes to slots available at international airports. They have drastically lower payout rates. They’re a great way to pass the time but aren’t comparable to actual casinos.

Admittedly, you should primarily play these games for fun. Although, this doesn’t mean it’s impossible to get a decent win.

Quite the contrary, multiple jackpots have been won in airport casinos. In 2016, a lady won more than $1.6 Million at the McCarran airport off of a $5 bet, playing Wheel of Fortune slots. That’s just one of the many examples. Additionally, there have been numerous BIG wins at airport casinos over the years.

Who knows, you might join the lucky winners if you stop for a few games while traveling through these airports. Just be prepared to miss your flight and book another one if you hit a win over $1,000. There’s paperwork you must fill out before receiving the cash. After all, Uncle Sam deserves his fair share of your winnings. 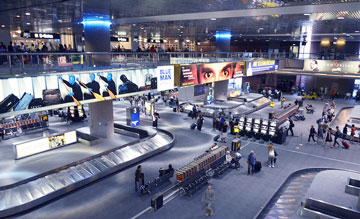 Home to the aforementioned jackpot, McCarran is an obvious inclusion on this list. As soon as the plane touches down, there isn’t a grain of doubt in anyone’s mind that they’re in Las Vegas.

And we’re not talking about the massive sign at the airport’s entrance, welcoming you to Sin City. Although, admittedly, it’s very difficult to miss.

No, we’re referring to the unmistakable sound of thousands of wagers coming from hundreds of iconic slots in the airport’s casino. There are over 1,300 slot machines scattered all throughout this Las Vegas airport casino. Regardless of which gate you need to go through to board the plane, you’ll have the Vegas’ favorite pastime in the vicinity.

Imagine coming to Las Vegas for the first time and hitting the jackpot while still at the airport. Now that would be some out-of-this-world beginner’s luck!

RNO is another airport that decided to take full advantage of the Nevada Gaming Control Board’s approval of casino games on airports. Reno-Tahoe is the busiest airport in Nevada County after McCarran, so it makes sense that they opted to increase the revenue by adding slots into the mix.

The airport provides over 240 slot machines, spread across the 4,100 sq ft casino space. Travelers can enjoy a variety of contemporary slots, including Wheel of Fortune progressive, Jeopardy, and Megabucks. Moreover, the casino is open every day of the week, from 5 AM to 11 PM.

The main software manufacturer providing RNO’s slot machines is International Game Technology PLC. So if you’re fond of IGT’s games, the dreaded waiting time will turn into an exciting gaming session. Minimum bets are $0.25, so be careful not to overspend while waiting for your flight. 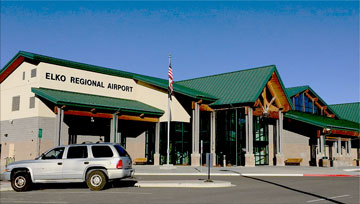 It’s no accident the third airport on our list is also located in Nevada, US. This state is the most lenient towards gambling out of all 50 states, so it shouldn’t be a surprise.

That said, casino games aren’t a part of the Elko airport itself. Rather, the Stockmen’s Casino is located in the Ramada Hotel and Casino, which is a short shuttle service ride away from the Elko terminal. What is more, the hotel’s gaming floor features 90 slot machines and a spacious live showroom.

Although not an ideal choice for a quick 15-minute game, if you’ve got some time to kill, then you can hop over to the casino to play slots or a few rounds of your favorite table games. Just keep in mind that table games are only available Monday thru Saturday, between 6 PM and 2 AM.

Again, there aren’t any casino games immediately available at the airport’s terminal. Still, we believe this airport is a worthy addition to the list since Kenner Airport Casino is only minutes away.

The Louis Armstrong airport is the largest commercial airport in the New Orleans urban area, and it receives a decent amount of traffic. The casino is a great way to pass the time for both travelers and locals waiting for someone to arrive at the airport. It’s clean and well lit, with professional, friendly, and attentive staff.

The only drawback is that the casino offers a modest selection of 30 video poker machines. Still, looking from an avid gambler’s perspective, it’s better than nothing.

Airport Casinos Might Become Common in the Near Future

As things stand, the airports we mentioned here are still exceptions to there rule. However, since it has proven lucrative and is generally well-received by travelers, they might soon become commonplace.

Several states in the U.S. are looking to pass gambling laws similar to Nevada’s, which would institutionalize airport gambling. Pittsburgh International Airport in Pennsylvania might be among the first to join the airports from this list.

But until that happens, keep the four airports we listed top of mind and try your luck at their respective casinos if life’s journey takes you there.